Invoice discounting is can be considered as debtor finance. It helps those companies which are having cash flow problems as the customers are paying invoices in 30 to 90 days. Offering payment terms is mandatory while working with large commercial and industrial customers.

However, allowing clients to pay in 30 to 90 days affect the business cash flow, especially when your financial reserves are not sufficient for paying the corporate expenses. Invoice discounting helps you in improving business cash flow and along with this it helps to position your company for further future growth.

Invoice discounting is the financial instrument which uses a company's unpaid accounts receivable as collateral for proving finance or we can say loan, which is issued by a finance institution. This is considered to be an extremely short-term form of credit or borrowing, since the finance company have the power of altering the amount of outstanding debt when the sum of accounts receivable collateral changes. The amount of debt issued by the finance company is always less than the total amount of outstanding receivables which is typically 80% of all invoices that to less than 90 days old.

With Invoice Discounting, your business always retains control over its own sales ledger and the payment can be chased in the usual way. Your clients pay you directly; no third party involvement is known by the customer.

Invoice Discounting is particularly suited for the business in specific areas such as:

But in any form of business which provides products and services to other businesses and provides clients with credit terms of 30-90 days, Invoice Discounting is the key for solving the problems as these are associated with slow payment. 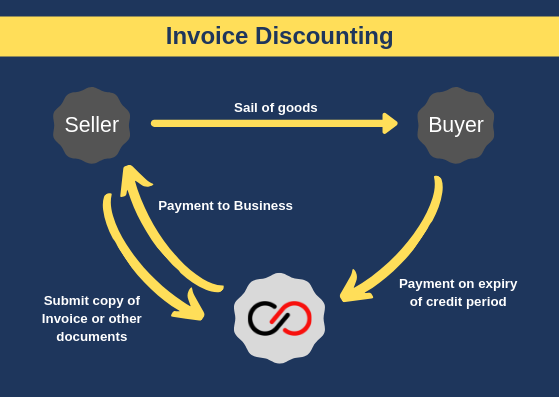 Easier to get than bank financing

Invoice discounting is easier to avail than the conventional bank financing. Companies that meet the following criteria usually qualify for funding:

For complex situations, or applications that demand for large amounts, the applicant may require to submit some additional information.

1. What is invoice discounting?

When a company requests for a loan by keeping its unpaid account receivables as collateral, the process refers to invoice discounting. In this type of financing, the financer can alter the amount of the debt as soon as the amount of accounts receivables, kept as collateral, changes; hence the form of the loan offered is also short term.

Also considered as debtor finance, invoice discounting eyes to benefit companies having cash flow problems, as their debtors are expected to pay invoices not before 30 to 90 days. If a company is facing problems with their financial reserves being insufficient to pay corporate expenses, allowing clients to pay in 30-90 days can affect the cash flow of the business. With invoice discounting, instead of waiting for customers to pay within the normal credit terms, companies receive the cash as soon as the invoice is issued; thereby getting an accelerated cash flow from the customers.

2. How does invoice discounting work?

3. What is the difference between bill discounting and factoring?

For more detailed information about their key differences you can visit Bill discounting vs factoring.

4. What is bill discounting?

Bill Discounting can be considered as a process of selling the bill to the third party which can be a bank or financial institution before its date of maturity, at an amount which will be less than its par value. The discount given against the bill is based on the remaining maturity time as well as the risk involved in it.

First of all the third party satisfies their firm regarding the drawer’s credibility, before advancing them with money. After knowing with the creditworthiness of the drawer, the financial institution will grant fund after deducting the relevant discounting charges or interest. When the financial institution purchases the bill for the client, it becomes the owner of the respective bills. If the client delays the payment, then he is supposed to pay interest as per prescribed rates.

Now, the customer forwards the collection of payment from its buyer to the financial institution or the customer may ask to forward the payment to the financial institution or to the factor to settle the balance dues. The factor provides the following services to the customer: Credit investigation along with debtor’s ledger maintenance, collection of debts from the buyer, credit reports on debtors and so on.

6. What is receivable discounting?

A receivable can be seen as a promise for future incoming value towards a business organization. This can be monetary worth as well as capital worth. It becomes important to know that it is considered as a future being defined as a value flowing to the business and it is usually not received at the point when a transaction is made. In the most basic form, it will be seen as an invoice which is submitted to the end buyer when a commodity is purchased. The reason because of which the consignments are not paid for on purchase is due to the end buyer being provided with credit days from the seller.

7. What are the key features of invoice discounting?

Want more information about invoice discounting? or looking for most suitable finance solution for you? Talk to our finance experts now.